Faber-Castell is a company that’s probably right up there with Derwent in terms of well-known coloured pencil brands. Most of us probably had one or the other in our school days (or at least, their children’s grade equivalents), and for those who carried their interest in art and drawing into their teenage years and then into adulthood, our first box of artist grade pencils was likely either a set of Derwent Artists or Faber-Castell Polychromos. Mine was the Derwent Artists, but because the Artists pencils are the hardest pencils on the market, I wanted to try some that were smoother and softer, so I bought a tin of the Polychromos. 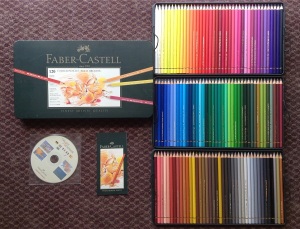 Here are my colour charts for the Polychromos pencils. 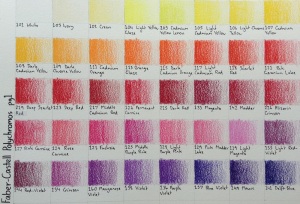 There’s a good balance of hues in the range, though with 120 colours to choose from, it’s hard to imagine them missing any, I suppose. More than 100 of these colours have been listed as three stars, or excellent lightfastness, with 16 having 2 stars and only 2 pencils having 1 star, which is generally considered fugitive (I’m not sure how these rank on the blue wool scale). As always, I would suggest conducting your own lightfastness testing rather than relying entirely on ratings provided by the manufacturer, but this is still a pretty good ratio of lightfast pencils compared to a lot of other brands and ranges (*gives Derwent the side-eye*).

Faber-Castell Polychromos pencils have a round barrel, which I’m not overly keen on; I prefer hexagonal barrels as they don’t roll off the table all the time. In terms of texture, these pencils are among the harder pencils available. Not as hard as Derwent Artists, but definitely harder than any of my Caran d’Ache Luminance pencils. In spite of that, they still feel soft, and are quite smooth to draw with, and they blend and layer well. This is perhaps because they are oil-based, instead of wax-based like most pencils. Their firm texture also means they’re less prone to lead breakage than some softer pencils. The White pencil is reasonably opaque for a firm pencil (moreso than most of Derwent’s line except for the Drawing range), but still not as soft or opaque as Luminance or Prismacolor.

The set includes three metallic colours as part of the range: gold, silver and copper. The silver pencil is relatively smooth and pleasant to draw with, but the gold and copper pencils are awful. They’re hard and scratchy and at any pressure other than heavy, they’re weak and dull; press heavily and you get a decent coverage of metallic pigment but the colours still aren’t as clear and luminous as other metallic pencils I’ve used (like the Derwent Metallics). Most fine artists don’t really use metallic pencils so it won’t be a huge issue for many people, but it’s worth keeping in mind if you were considering buying these colours in open stock. On that note, many art supply retailers carry individual Polychromos pencils as well as sets, so you can easily replace one if you use it up; they seem to be a little bit cheaper than most of the other artist grade pencils as well (eg. at my local art shop, Derwent Artists pencils are $3 while Polychromos are only $2.20).

Here’s a toucan I drew using the Faber-Castell Polychromos pencils, based on a photo by Cindy Fry in the Photos for Artists Facebook group. I also wrote a demonstration post for this drawing here.

If you want a good quality set of pencils but can’t quite bring yourself to spend big bucks on Caran d’Ache or Derwent’s new Lightfast line, the Faber-Castell Polychromos pencils are an excellent choice. almost all of the colours are lightfast, and they strike a nice balance between high pigment concentration and firm but smooth texture.

This entry was posted in Materials, Pencils and Blocks, Reviews and tagged Coloured Pencils, Drawing, Faber-Castell, Polychromos. Bookmark the permalink.