I know the Derwent Lightfast pencils have been out for a while now, but I’ve only just got around to picking up a set to try. When they were first released, there were only 36 colours in the range, but this was later expanded to 72 and then, more recently, to 100. Usually I go for the full range straight away, but having been bitten by that a few times – buying a whole set of pencils only to find that I don’t care for the texture or that most are not lightfast enough for use in work I might display or sell – I decided to just start off with the set of 12. 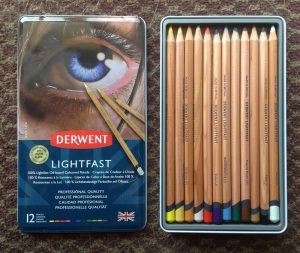 Here’s the colour chart for my tin of 12.

In the past, I’ve generally been pleased with the selection of colours that Derwent chooses for their tins of 12 pencils, which serve as a good introduction to their ranges (see my review of their Procolour pencils, for example). The only gripe I have is that they never include a white pencil, but for the most part, it’s easy enough to just buy a white in open stock. The Lightfast 12 colour set includes a white, which is great, but some of the other colour choices Derwent has made here are… bewildering.

The first thing I noticed when ordering the pencils online was the lack of a proper blue. At first I thought I could use the Mid Ultramarine over the Violet to get something approximate to a dark blue (like Prussian Blue or Ultramarine), but because the Mid Ultramarine has white pigment added, all this does is create a lavender colour. Most other 12 colour tins include a Prussian Blue (or Ultramarine), and a Phthalo Blue. Given this set only includes a ‘watered down’ blue, you basically can’t get a true blue; even for Australian skies, Mid Ultramarine is still too cool and ‘lavender-ish’ to be suitable. There’s also no magenta, which means you can’t get a true pink (using White or Salmon with the Scarlet just makes a sort of pale orangey red). Omitting two primary colours while including Yellow Ochre, Sandstone and Brown Ochre (when one or two of these could be left out with no real harm done) makes no sense to me. Heck, the tin includes a white, so why did they feel the need to give us a blue with white pigment added instead of just giving us a straight Ultramarine Blue? I had planned to do a drawing of a crimson rosella as my demonstration for these pencils but because I wouldn’t have been able to get that vibrant blue for its feathers, I had to change my plans. When I went and looked at the colour charts on Derwent’s site, I saw that even some of the larger sets are lacking in blues; the 24 colour tin adds a Blue Violet (which has PV23 in it), and the wooden box of 48 adds a Denim blue, but it’s not until the 72 colour tins that a solid selection of blues is included. Reds and magentas don’t fare much better; you won’t get much aside from Scarlet until you get to the 48 colour tin.

On a side note, you know how all the Derwent tins have those little coloured lines along the bottom on the front to show you how many colours and what colours are in the tin? Don’t be guided by that indicator on the Lightfast tins, because it bears no resemblance to the colours you actually get (it seems they just copied it from their other 12 colour tins). One good thing about the Derwent Lightfast pencils is that they include the pigments used in each colour, so you know exactly what you’re getting (unfortunately the tin I got must be old, as the pamphlet inside only lists 36 colours).

Grumbles about colour selection aside, I quite like how the Lightfast pencils handle. In terms of texture and firmness, they’re very similar to the Caran d’Ache Luminance pencils, which are the only other pencil brand currently on the market that only includes lightfast colours (Faber-Castell’s lines are generally highly rated but do contain some fugitive colours). If anything, the Derwent Lightfast feel slightly softer, but the difference is negligible. However I think the Caran d’Ache Luminance white is slightly more opaque than the Derwent Lightfast white. While doing some swatches to test, I also noticed that the Lightfast black is more of a warm black, while the Luminance black has a colder hue (which isn’t a good or bad thing, just an observation for those who may be interested). For the most part, the leads were quite sturdy, though unfortunately I had a lot of breakage issues with my Violet pencil, and after being used in only one drawing (and only for a few layers), it’s now about a third shorter than all the other pencils because I had to keep sharpening it all the time.

Their competitiveness in terms of price depends on where you buy them; Caran d’Ache sets seem to be more expensive on average anywhere, but the cost of individual pencils varies widely. On UK store sites, the Lightfast pencils are a lot more expensive than the Luminance, but on Australian sites (at least those that have them open stock), the Lightfast pencils are cheaper, at about $3.75 per pencil. If you plan to sell or display work you do with coloured pencil, it is worth shelling out the extra money for the peace of mind you’ll get knowing your drawings won’t fade.

Here’s the drawing I did with my set of Derwent Lightfast pencils (for a step-by-step demonstration of how I did it, click here).

Overall, I liked the Derwent Lightfast pencils and was generally happy with their quality and performance. I would recommend choosing your own colours from open stock rather than buying one of the smaller tins, otherwise you’ll likely find yourself missing important colours (that being said, a tin can be a cost effective way to get a decent selection of pencils quickly). If you already have the Luminance pencils, there’s no need to rush out and buy the Lightfast ones, though it might be worth getting a few individual colours that don’t exist in the Luminance range. However if you’re looking to get your first set of lightfast pencils, a 72 colour set (or larger) of Derwent Lightfast would be a good purchase.

This entry was posted in Pencils and Blocks and tagged Coloured Pencils, Derwent, Drawing, Lightfast. Bookmark the permalink.