It’s that time again, when we all reflect on the year just passed and make promises to ourselves what we’re going to do differently in the year to come: New Year’s Eve.

As I conduct a post-mortem of my 2019, scooping out its insides before dumping them into little metal trays beside me, there’s no sense of closure of accomplishment. At the start of this year, I thought I would end it having submitted my thesis for my PhD after 6 and a half years of research and being able to look ahead with joy and optimism about the opportunities it might bring. Instead, the problems that had plagued me throughout my entire candidature continued to do so, and new ones also arose, making it pretty much impossible for me to do my data analysis and finish my write-up before mid-December, when my thesis was due. On top of that, I’ve developed a frightening and progressive health issue which I still don’t have a diagnosis for, and worrying about it has utterly consumed any residual emotional energy I might have had left. So, in October, instead of being on the final stretch of thesis revisions, I found myself forced to discontinue my PhD and walk away from the project with nothing to show for it except depression and a new-found obsession with gardening (hey, I had to find something to fill in the time). 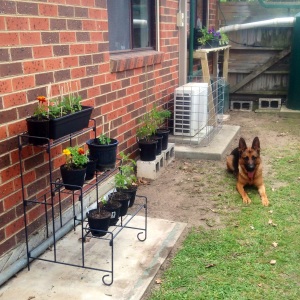 I’ve never really been one for New Year’s resolutions, probably because I see so many other people make them, stick with them for a week or two before having a misstep and then basically throwing their hands in the air and saying, “Well, I failed, not going to bother trying anymore” and returning to their previous bad/unhealthy habits.

But in 2020, due to 2019 being an absolute train wreck of a year in just about every way possible, I’m going to try to make some changes for the better. That being said, I’m also acknowledging up front that there will be days where I ‘fall off the wagon’ or some goals that I can’t meet, at least entirely, and deciding that it’s okay to stumble here and there as long as I get up and keep trying. And yes, I know that people who want to make changes could do so at any time, not just an arbitrary time like New Year’s, but for me I always struggle with this time of the year, thinking to myself, “What have I achieved? Nothing.” (especially true this year). I’m hoping that listing my goals and being specific about them will help me turn New Year’s from a time of moping to a time of doing. Also, even if I do trip up sometimes, some healthy food/exercise/art/writing is better than none.

MY RESOLUTIONS
Diet
–Eat less sugar: I’ve already been doing this for a few months now, but I want to take it further and try to cut out as much added sugar from my diet as possible. I’ve pretty much stopped having energy drinks completely (only had 2-3 in the last 3 months), and I’ve been getting low-sugar varieties of yoghurt and chocolate (on the rare occasions I have chocolate; I’ve mostly stopped buying that as well).
–Eat more fruit and vegetables: Again, I’ve started doing this already but I know I can do better. I tend to eat a lot of processed meals (like microwavable pasta and canned soups) so I want to cut those out and start eating more fresh food so I know exactly what’s in it. I’ve also started eating at least 2-3 pieces of fruit every day so I want to maintain this, plus include more dark leafy vegetables.
–Eat less fast food: This is another goal I’m largely doing already but want to maintain. Aside from a pizza or pasta three or four times in as many months, I’ve pretty much stopped getting takeaway food, and on the rare occasions I do need to buy something to eat for lunch while I’m out, I’ve been going for healthier options like salads or sandwiches. At least at uni, both campuses I teach at now have a number of healthy options to choose from, so I’m not stuck with eating fatty fried food if I don’t have time (read: am too lazy) to bring lunch from home that day.

Exercise
–20 mins per day/5 days per week: This is one of my most important goals but also the one I’m most likely to struggle with. Aside from walking to the shops/train station and walking the dog sometimes, I basically don’t do any exercise (much of this is because of my knee problems, which make most weight-bearing activities a no-go). I bought that RingFit Adventure game on Nintendo Switch and so far it has been quite good (and fun) at making me do a variety of exercises, but I know I need to do more, and more often. I plan to join a gym (once I find one with no contracts where I can just pay weekly; I’ve already booked in for a free trial on Thursday morning with a friend) and go 2-3 days a week, and then on another 2-3 days a week I’ll continue with the RingFit Adventure game. I’ll mostly be doing cardio stuff like cycling, but hopefully I can then try other types of exercise once I’m stronger and fitter. 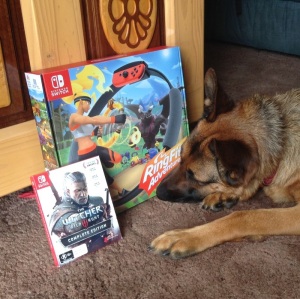 On a side note, my Diet and Exercise goals have nothing to do with losing weight, as I’m already at a ‘healthy’ weight. However, though I’m fairly slim, I am woefully unfit, as I discovered a month or so ago when I had to run two blocks to catch a train, and it almost killed me. As I collapsed onto the train seat, gasping and panting like a beached whale with asthma, I realised that if I was this unfit now, what would I be like in my 50s or 60s? That was an unpleasant wake-up call and though I’d known for a while that I needed to change my habits, that was what finally gave me the boot in the arse I needed to do something about it. At least my new gardening hobby is good in that in addition to providing me with flowers and fresh vegetables and herbs, it makes me spend time outside in the fresh air.

To try to help me stay on top of my diet and exercise, I’ve purchased an exercise book and written out a list of important vitamins and minerals people need and what foods they are found in. I’ve also written out some different types of exercise that I should be able to do (things like weight lifting and running are a no-go because of my knees, but things like cycling and swimming should be achievable for me). I’m going to use the same book as a sort of journal to record what foods and drinks I eat each day and how much exercise I do. I know this sounds like I’m going to be one of those stick-up-the-bum health nuts, but I’m not going to be counting calories or pulling out my calculator to work out how many micrograms of each vitamin I need to eat; it’s basically just so I can see at a glance what I’ve eaten and what exercise I’ve done (and how much) over the course of a week or so, and then eat or do a few things differently the following week if I think there’s anything lacking.

Creativity
–Do some sort of art at least 2 days a week: I love painting and drawing, but due to lack of time/energy and poor mental health, I haven’t done anywhere near as much as I should over the last year or so. I want to try to get back into the habit of making art at least semi-regularly, even if it’s just a small sketch in a journal or painting the size of a postcard. The more frequently you practice a skill, the faster that skill develops, so I hope increasing the frequency of my painting and drawing will being a much more noticeable improvement.
–Spend at least 3 hours a week on my creative writing projects: I love writing fantasy novels, but aside from occasionally scrawling notes on the back of shopping receipts while in class, I basically haven’t touched any of my works in progress since starting my PhD. I want to ease myself into it slowly by spending 3 hours a week with my writing, even if I don’t actually write anything to start with and just re-read/absorb the work so I can get back into the headspace for writing. Hopefully after a while I’ll be able to spend more time on it each week. 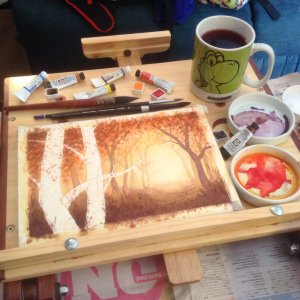 Academia
–Make a decision about my PhD: Technically I can go back to my PhD again at any time within the next 4 years, but I don’t really want it hanging over my head that long. I’ve set myself two ‘deadlines’ for deciding. One at the end of June, 2020, where I’ll try to decide if I want to go back or not. If I’m ready, I’ll get in touch with my supervisor and get the ball rolling. If I still don’t know for sure, my second deadline for deciding will be December 2020. At that point I may be in a position where I want to pick it up again. However, if I’m still undecided after a year, I’m going to take that as a sign that I’m never going to be ready and that I shouldn’t go back, and accept that I will never finish my PhD. Much of this will depend on if I get a diagnosis or resolution for my on-going health issues, as if it keeps getting worse and/or I don’t know what it is, I’ll be too worried about that to focus on my research. There is a part of me that still wants to finish my PhD, but I also don’t want to spend time on a project that has made me bitter and miserable when I could spend that time doing things I enjoy, especially when I may not be able to do the things I enjoy in the future. On a side note, I’m also not sure finishing my PhD will be worth it even if I do overcome my health issues; since I couldn’t do my data collection until late this year, I don’t have any published papers to accompany my thesis, which will make my thesis more or less useless in terms of getting a job in academia. I know that I am still in a very negative frame of mine when it comes to my PhD, though, which is why I’m distancing myself from it for 6-12 months before I make a decision.

So, what resolutions is everyone else making (if any)? What strategies are you going to use to maximise your chances of being successful?

This entry was posted in Personal and tagged Academia, Diet, Fitness, Life, Personal. Bookmark the permalink.