Though I mostly prefer working in colour, every now and then I go through a phase of feeling that I should practice sketching in monochrome, or at least using limited colours, to improve my drawing skills. When I mention this, artists usually tell me to try charcoal, which I have in the past and utterly loathed (it’s basically like having the sound of someone scratching their nails on a chalkboard in stick form). When one of the online art supply retailers I buy from had a sale on sketching sets, I picked up one of the Cretacolor Drawing sets to try.

There are a few Drawing sets in Cretacolor’s range, some of which are purely monochrome and some of which have the usual array of sketching colours (sepias, sanguines etc). The sets range from 10 to 35 pieces, but I got the Creativo set, which includes 27 pieces. Here are my swatches for all the items in the set.

As you can see, 12 of the pieces are the Pastels Carres, or hard pastels. There are also three watersoluble graphite pencils (Graphite Aquarell), some charcoal and chalk pencils and a few sanguine and sepia pencils, as well as accessories like a paper blending stump, a sharpener and a kneaded eraser, all of which are good staples to add to a sketcher’s arsenal. My set also included a sample bit of sandpaper, which can be useful for sharpening pastel pencils. Make sure you look at the contents descriptions for each set though. In most cases when you have various sized sets in the same range, the larger sets usually include everything in the smaller sets, plus some extra stuff, but that’s not the case here. For example, there are items in the Artino (10 piece) set that aren’t in the Creativo set, and items in the Creativo set that aren’t in the large 35 piece Ultimo set.

The pastels are similar to the Derwent or Faber-Castell pastel blocks in firmness and texture; when it comes to soft pastels, these are definitely at the harder end of the spectrum. This means they’re a little crumbly and some felt a bit scratchy (especially the black one), but they still smudged and blended when rubbed with a finger, even if not as easily as soft pastels do. I felt that several of the browns were very similar in hue and value, and it would have been nice if a grey pastel or two had been included instead of so many almost-duplicated colours.

I was most interested in the various chalk and charcoal pencils that came with the set. A I still enjoy using my Cretacolor Artists’ Leads occasionally, but I find them a bit fiddly in terms of having to stop and take a lead out of the holder and put a new one in every time I want to use a different one. All the varieties in that lead set are represented as pencils in this Creativo Drawing set, including the two wonderful Sepias and the oil Sanguine I really liked. There are also three chalk pencils (a black and two white, though I can’t see the difference between the two white ones), which, though they feel a little dry, still go down smoothly enough. The charcoal pencil included unfortunately didn’t do anything to change my dislike of charcoal because it still has that scratchy feel I loathe, as does, to a lesser extent, the dry Sanguine pencil. The tin also included a Nero pencil, which I’d never tried or heard of before. After doodling with it a bit and deciding that I liked it, I looked it up on the internet and discovered that it’s an oil-based charcoal pencil. This means you can get darker marks than with normal graphite but without the crumbly scratchiness of charcoal, though it doesn’t smudge and blend that well. These pencils apparently come in four grades, of which I got the Medium. I would have liked to get Extra Soft instead as it seems to be the darkest, but I can just buy one open stock (even if they are a bit dear for individual pencils).

The sharpener had a good blade and did a nice job sharpening one of the white chalk pencils I used, without damaging the core or the wooden barrel. I didn’t bother using the kneadable eraser as I already have one that I’m using but I expect it’ll perform the same as any other kneadable eraser. I also didn’t use the blending stump as I’m lazy/messy and just use my fingers, but I guess one blending stump is much the same as another anyway.

Here are some sketches I did with the Creativo Drawing Set (all on Stonehenge Vellum texture drawing paper). 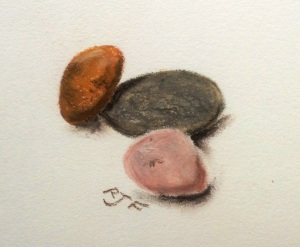 For anyone who wants to get started in monochrome or limited colour sketching but isn’t sure what tools to buy to begin with, I’d recommend getting one of these Cretacolor Drawing sets. Even the small ones include a nice variety of good quality products for you to try, and the price is reasonable. Since they include erasers and other helpful items like sharpeners and blending stumps (at least for the bigger sets), you will pretty much have everything you need in one tin to go out and start sketching.