Aside from Derwent, Prismacolor are probably one of the most well-known and commonly-used coloured pencil brands out there. It wasn’t unusual for art supply stores to carry only these two brands, and even now they still dominate the shelves. I’d had Derwent pencils since childhood, since that was what my family bought me, but a few years ago I decided I’d like to try Prismacolor Premier pencils and see what all the fuss was about.

I originally bought the 132 colour tin from America, but after Prismacolor released another 18 colours, I ordered those as well to round out my collection to the full 150 colours. 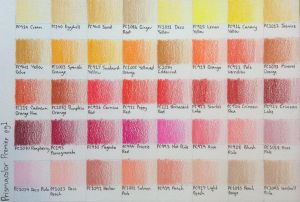 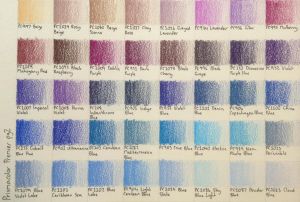 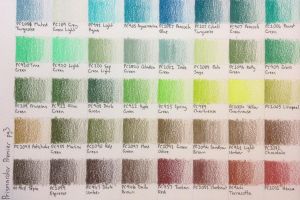 As you can see from my pictures, just about every colour imaginable exists as a Prismacolor Premier pencil. There are a lot of colours that don’t really have an equivalent in other coloured pencil brands – like some of the very deep purples and extremely pale yellows, peaches and beiges – but there are also a lot of near-duplicated colours, which isn’t surprising for a range this size. Also, there are a lot of fugitive colours in the Prismacolor Premier line. Their pencils are rated on the ASTM scale, with I being Excellent and V being Poor. 85 fall under either I or II (which is the least anyone should be using if they intend to sell or display their work), which means 65 are fugitive. Unfortunately the fugitive colours include most of the pinks, violets and blues (the three neon colours are also fugitive, but all neon colours generally are). Strangely, Prismacolor doesn’t even seem to have colour charts on their site for their products anymore.

Prismacolor Premier pencils have the softest leads of any coloured pencils I have used, aside from maybe the Caran d’Ache Luminance line. Their almost creamy texture allows for smooth blends and even layers of colour, and they are more opaque than other pencils. This makes it particularly easy to add highlights or burnish several layers, as the white and other pale colours go on over any of the other colours and lighten them considerably. It’s easy to see why the vast majority of coloured pencil instruction books seem to recommend Prismacolor Premier pencils (if not by brand name then by the specific colours, at least). Their Colourless Blender is also quite useful for smoothing out layers of colour, even if it does darken it slightly.

Unfortunately, however, there is a catch, and it’s a pretty big one. Their soft leads mean they have always been a bit more prone to breakage than other pencil brands, though any pencil will suffer internal breakage if it’s dropped or knocked around a lot. However, a few years ago, Sanford – Prismacolor’s manufacturer – shifted their production from the USA to Mexico. Since then, the quality of the pencils has dropped significantly, resulting in issues like crooked leads within the wooden casing and even more breakage than normal. If you look at my picture of my set, you’ll see some of my pencils are much shorter than full length, even though I only used them to make colour charts before taking the photo. Many of the colours I used in my demonstration drawing also ended up losing a third to half their length, even though it was a small drawing. This is because they kept breaking when I was sharpening them. The pencils all have USA or MEXICO stamped on them so it’s easy to see where they were made by looking at them, but unfortunately you don’t have this luxury when purchasing online, and it is pretty frustrating to buy a new pencil and have it break so often that by the time you’ve sharpened it, it’s shorter than the pencil it’s supposed to replace.

I’ve seen people blame the sharpeners for being old or having dull blades, but I had the same problem even with brand new sharpeners. Some artists on the WetCanvas forum I visit suggest that you can reduce breakage (or fix leads that have shattered internally) by microwaving the affected pencil for 20 seconds, or putting it in the oven for a short time, but really, if I’m buying a set of coloured pencils, I shouldn’t have to go all Betty Crocker on it before I can use them. I should just be able to take them out of the box and start drawing (also if I wanted to bake stuff I’d be running a cooking blog, not an art blog). Apparently some of the pencils have some sort of foil in the embossed printing on the pencil which catches fire if microwaved, so you have to be careful if you try microwaving them. You could also hand sharpen the pencils using a blade but that’s more time consuming and potentially dangerous if you slip. Either way, no other pencil I have tried requires so much effort to be able to use it.

Yet none of this seems to stop artists buying Prismacolor. And I get it; I really do. Those beautiful creamy leads aren’t quite rivalled by any other brand, and as I mentioned above, most of the coloured pencil instruction books seem to recommend them. But the problem is that as long as people keep buying Prismacolor pencils even with the quality control issues, Sanford is going to have no real incentive to change their ways, meaning they’ll keep putting crappy pencils on the shelves of our art supply stores. And it’s not like they’re significantly cheaper than other brands, either (aside from in America, perhaps). They are a little cheaper than Derwent Artists and Coloursofts or Faber-Castell Polychromos pencils, but if you end up wasting half the pencil because it keeps breaking all the time, are you actually saving money? Other brands may not have quite as soft a lead as Prismacolor Premier but this is more than made up for by the fact you can still layer and blend them perfectly well, and you can actually use the whole pencil you’ve spent your hard-earned cash on.

Here is my drawing done with the Prismacolor Premier coloured pencils.

Even though Prismacolor Premier coloured pencils have a beautiful, soft texture, I find it hard to recommend them because of their constant breakage, lack of quality control and issues with lightfastness. If you absolutely must try them, don’t buy a set; just get any unique colours you can’t get in other brands (it is also worth getting a few white Prismacolors for their use in burnishing and highlighting, and maybe a Colourless Blender). Have a look at individual stock in the shop and make sure the leads are centered (and if possible, avoid any with MEXICO stamped on them). Hopefully one day Sanford will address the complaints of artists and lift their standards, but until then, I’d say if you’re not already using Prismacolor pencils, there’s no real benefit to starting now.

This entry was posted in Materials, Pencils and Blocks, Reviews and tagged Coloured Pencils, Drawing, Premier, Prismacolor. Bookmark the permalink.