A few months ago I won a mystery box full of art supplies through a giveaway on Grumbacher’s Facebook page. One of the items in the box was a set of four bottles of Higgins Drawing Inks. Having never used inks before, I initially shoved them into my cupboard with no real intention of using them, but eventually I figured I should at least give them a go, so I fished them out again. 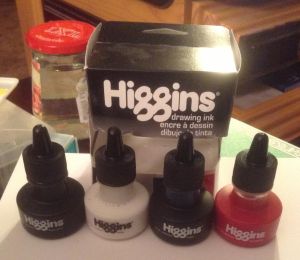 Here are the swatches for my four ink colours. 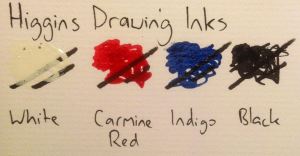 Most of the inks are transparent, as one would expect, but the white one was quite opaque. The white ink also dried with a little raised texture, unlike the others which all dried completely flat. Of the four, the indigo ink took the longest to dry. Most of the colours seemed waterproof once they were dried, but the indigo one did smudge a bit when I scrubbed at it with a wet brush.

I believe these inks are supposed to be used with dip pens or technical pens, but I don’t have any of those (my mystery box included inks and pen cleaners but no actual pens), so I just used them by drawing on the paper straight with the ink droppers. The droppers included in the bottles are quite precise and allow for plenty of control in squeezing out the ink.

There are 11 colours available (including two variations of white), but these inks don’t seem to be available outside of America; besides eBay and Amazon, the only sellers I found who carried them were Cheap Joes and Dick Blick, both American art supply retail sites. That being said, they’re only about $4-5 USD a bottle, so if you do live in America, you’ll be able to get them easily and cheaply.

Here’s a little blue wren I draw from imagination with the Higgins inks on a background created with Winsor & Newton watercolours. 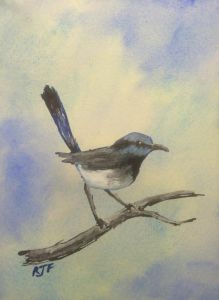 Though I’m not an expert on inks by any means, I quite like the Higgins Drawing Inks. I can’t say how well they’d work in pens, but if you just want something that will allow you to do quick, loose ink drawings, Higgins Drawing Inks will suit your needs. The convenient droppers included in the bottles mean you can just as easily use them to draw even if you don’t have a proper ink pen.

This entry was posted in Inks, Materials, Reviews and tagged Drawing, Higgins, Inks. Bookmark the permalink.