One thing I’ve learned about myself when it comes to using soft pastels is that I’m quite fussy about what surfaces I like to work on. It needs to have some tooth, so it can hold plenty of layers, but not be so rough that it gobbles up my pastels the way I gobble up Maltesers, or that it sands off half my fingers when I try to blend on it (I suppose I should use one of those tortillion things but eh). I also like it to have a relatively smooth, even texture.

While digging through my art supply cupboard recently, I came across this little jar of Art Spectrum Fine Tooth Colourfix Primer that I’d bought a few years earlier and promptly forgotten about. 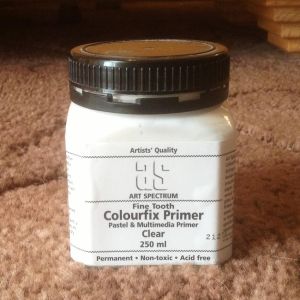 For those who haven’t seen or heard of it before, Art Spectrum’s Colourfix Primer comes in a huge variety of colours, as well as white or clear. Using a coloured primer means you can easily influence the mood of your finished pastel drawing. I got the clear one, as I figured it’d be more economical for me to paint the background in whatever colour I wanted and then use the clear primer over it, rather than buying a jar of coloured primer and then only having that colour. I know some artists prime their surface with the gritty ground and then paint over it, but doing it this way destroys your paint brush, so I prefer to lay down the colour first with a brush and then apply the primer with one of those sponge brush things.

All of these primers are Fine Tooth primers, though you can also buy a Supertooth version (you can only get this in clear, though). This Supertooth one apparently has 50% more grit than the Fine Tooth (which I think is now marketed as their Original Primer; they’ve changed the packaging since I bought my jar), but I’ve only tried the Fine Tooth version.

You can apply this primer on just about anything – canvas, timber, ceramic, metal etc – in addition to card and paper, though they recommend at least a 300gsm paper should be used. This is because anything thinner will buckle, as I found out when I used it to prime some Canson Mi-Teintes I wanted to use up. I didn’t like the texture of the Mi-Teintes paper as it was so I decided I might as well try to get rid of it by priming it with the Colourfix Primer and using it up that way. Though it curled significantly, I was later able to flatten it out a lot by curling it in the opposite direction and holding it like that for a few minutes.

Texture-wise, the Fine Tooth Colourfix Primer feels quite similar to Clairefontaine PastelMat, though perhaps slightly grittier. For me it strikes the perfect balance between toothiness and smoothness, as I was able to put down quite a few layers of pastel yet still blend fairly easily, and it didn’t chew through my pastels as badly as the UArt paper I tested did. At about $14 for a 250ml jar, it’s also quite cost effective if you do a lot of pastel drawing and want to prepare your own surfaces. Art Spectrum also makes sheets of Colourfix paper in the same colours as the Primers, and though most places only seem to sell them in packs of 10, you could probably find single sheets for sale if you looked around.

Here’s my sample pastel painting I did on a surface prepared with the Colourfix Primer, using Schmincke soft pastels. 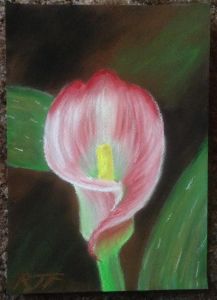 If you do a lot of soft pastel work, you should definitely try a jar of Art Spectrum’s Colourfix Primer, or at least buy one of their pre-primed sheets to see if you like it. It’s an economical ground for pastels and pastel pencils and it offers a lot of flexibility for how you want to colour your ground.