While I was at my Nan’s last weekend, we each painted a landscape with her old set of oil paints. While I was painting, I took a few progress shots of my beach scene so I thought I might as well turn them into another demonstration post. Given these are old paints, the colours might not be the same as modern tubes but you should be able to find similar colours in whichever brand/s you already use. Bellini aren’t even sold anymore unless you find them on eBay, Rowney Georgian are now sold under the Daler Rowney brand and many manufacturers no longer make Flake White due to concerns about its toxicity (any white oil paint will do the job, though).

Procedure
Step 1
Using a heavily diluted Cobalt Blue, sketch the components of the scene; the horizon line, the top edge of the wave and the edge of the water where it meets the sand. Mix some Naples Yellow with a small amount of Cobalt Blue to get a greyish blue-green, and thin it with some solvent before using it to block in the sky with a large (size 8-12) flat. Add a bit of Paynes Grey to this mix and block in the sea behind the wave using a smaller flat or bright brush. 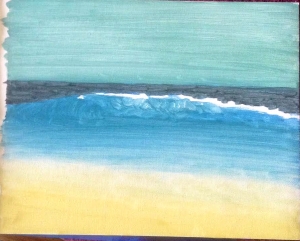 Step 2
Put a darker layer of the grey/sky blue mix down for the sea in the distance. Add a little white to the grey and add some distant waves with a small round brush; these should not be prominent, but just visible enough to break up the appearance of a completely flat sea. Go over the wave and foreground water with another layer of your bluish Cobalt Blue/Naples Yellow mix, smoothing out the brush marks in the previous layer. Blend a tiny amount of Chrome Yellow into the top of the wave on the left hand side to represent the light showing through the water. For the shadowed area of the wave, add a little Payne’s Grey to your water mix and blend it in at the base of the wave, leaving an area in the middle where the crest of the wave will go. Mix some Flake White with a tiny bit of your greenish blue water mix and paint the crest of the wave with a small flat or bright brush, making sure your brush strokes follow the direction of the water.

Blend another layer of Naples Yellow into the beach with a large flat brush, starting at the bottom and merging it with the water. There should be a strip of sand/water where the two meet that is lighter than the water above and the sand below to represent the shallow water. Using the soft makeup brush, blend the area between the sand and the water with a gentle circular motion to smooth out the transition.

(note that the sky hasn’t been lightened in this step and should still look like it did in Step 1. For some reason my iPad camera washed it out when I took the photo) 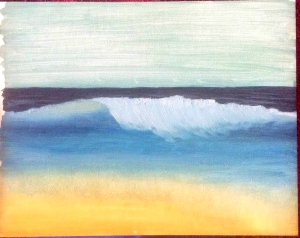 Step 3
Mix some Cobalt Blue and Payne’s Grey to make a dark blue-grey for a storm cloud (depending on the Payne’s Grey you have, you might need to use less of it if it’s particularly strong). Start brushing this on over the sky using horizontal strokes and a large flat brush, making it darker in the top right corner leaving a little light area along the horizon. Leave a larger light area on the left hand side to show a bit of clear sky. Make sure you have cleaned the makeup brush (just swirl it into a tissue until no more colour comes off) and brush diagonally down from the cloud over the blue sky area towards the sea to create the effect of distant rain. The sky is now finished.

Using a slightly darker mix of the blue-white you painted the foam with in the last step, go over the crest of the wave again, extending this along the top edge of the wave on either side towards the edge of the canvas. Next take some pure white and, using a small round brush, paint in the white lines over the wave’s crest. At the bottom edge of the crest, dab in some pure white paint with the tip of a palette knife. Some of the underlying blue will mix with this, preventing the white from looking too harsh. Using the same brush and your finger, flick the bristles to add some white spatter at the edges of the wave.

Take a little Yellow Ochre and blend this from the bottom left corner of the sand upwards. This gives a bit more depth to the sand nearest to the viewer. Then take the small round brush you used on the wave to paint in criss-crossing lines of foam in the shallow water where it laps on the sand. These should be clearly defined closest to the water’s edge and grow less distinct as they go further out, disappearing entirely once they are about half way towards the wave. Make the foam at the very edge of the water a little thicker than the other lines (you might want to apply it with a palette knife in a few places to create the more pronounced texture).

Now all that remains is to sign your name in the bottom corner. 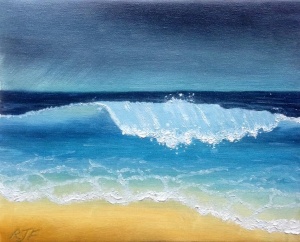 Thus ends my first oil painting demonstration post. Looking at the picture now, I realise I should have darkened the shadow under the wave more, but I can go back and do that another time. I hope you’ve enjoyed this post, and wish you all happy painting!