American art supply retailers often have a “Spend X amount and get X% off” deal, and when my order is almost at the threshold to go up to the next discount bracket, I usually throw in something small just to get me over the line. One of those small items was the Cretacolor Artists’s Assorted Lead Set and Lead Holder.

Here are some swatches for each of the leads in the set; hard pressure on the left, medium pressure in the middle and light pressure with an attempt at smudging on the right. 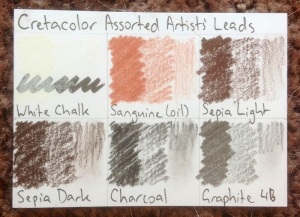 You can buy about 13 different types of Cretacolor leads individually, but the six that come in the set are White Chalk, Sanguine Oil, Sepia Light, Sepia Dark, Charcoal and Graphite 4B. Others available include the extremely black Nero leads, Dry versions of the Sanguine lead and various grades of hardness/softness in the Graphite and Charcoal leads. I’m not sure whether I have Charcoal Medium or Soft because it’s not specified on the packet. The leads are about 11.5 cm long and 5.6 mm thick so they’re reasonably sturdy, though I suspect it wouldn’t take too many accidental drops to break them.

Before buying this set, I’d never really done much in the way of monochrome drawing or sketching; I mostly focus on painting, and if I do draw, it’s usually with coloured pencils. I only really picked it since it came up on some “Gifts for under $10” page and looked more interesting than anything else in that category. Without doing much research into it before I opened the packaging, I was expecting the leads to be more or less the same texture, but each one is different.

You might expect the White Chalk one to be scratchy and hard but though it is firm, it is also quite smooth. It’s opaque enough to be useful in putting highlights over the other lead colours or on a coloured paper background. I didn’t have any coloured paper when I did this review (except for the Canson Mi-Teintes, which is more suited for soft pastels and which I don’t particularly care for anyway) but these leads would be quite at home on coloured paper, especially on earthy brown or neutral grey papers.

The Sanguine Oil lead is also quite firm and feels very similar to using a regular coloured pencil. It doesn’t really smudge, but by pressing heavily with it, you can build up a good, semi-opaque layer of this nice reddish-brown. The two Sepia leads have a drier texture, though they are not unpleasantly scratchy. They are more opaque than the Sanguine Oil lead, and you can do a bit more smudging with them.

Next up is Charcoal, which, as you might expect, is rather dry and scratchy. I’ve never been overly keen on charcoal because of this scratchiness (it reminds me too much of someone running their fingernails down a chalkboard) and this lead hasn’t really swayed me on that point, but this is down to personal preference. I was a bit disappointed that you can’t get really deep darks with the charcoal lead and would have liked to get one of the Nero leads instead (I’ve heard that the Nero Soft is about the blackest black you can get in sketching materials). On the plus side, the charcoal lead is good for blending and smudging (a little TOO good; I ended up with charcoal all over my hands and somehow on my face by the time I’d finished my sample drawing).

Finally we have the 4B Graphite Lead. Most of you have probably used a standard 4B graphite pencils before, so this one won’t be anything new to you. It is nice and soft and relatively easy to get a nice dark laid down, but it doesn’t really smudge that much. All of the leads lift quite easily with a kneaded eraser, so it’s easy to fix up any mistakes you make while sketching.

The lead holder is very useful especially for the charcoal lead, as it helps keeps your hands clean. It’s a bit chunky for my liking, but I have relatively small hands, and it would be hard to make it much thinner given how fat the leads are. One of the little plastic ‘teeth’ that helps hold the lead in place snapped off the first time I used it, but I’ve had no issues since then and it still holds the lead firmly in place, so it’s not a big deal. The plastic box the leads come in is sturdy but has no way of being held shut, so you’ll have to either put an elastic band around it or just find another case to keep them in.

Here are some little random sea shell sketches I did on a Strathmore Vellum Trading Card.

The Cretacolor Artists’ Assorted Lead Set and Lead Holder would make an excellent gift for someone who wants to get started in monochrome sketching or have a pocket-sized drawing set. The set was only about $8 AUD from whichever US supplier I bought it from and the individual leads are $1.25 (AUD) from Jackson’s in the UK (for some reason they don’t have the set of six), so it won’t put a huge dent in the art supply budget, and they’re compact enough to take anywhere.