Because I loved M Graham’s watercolours so much, when I saw that an art store near my Dad’s work carried their acrylic paints as well, I coerced him into dropping in and grabbing some for me on his way home one night. I got four tubes; enough to allow me to mix a variety of colours without being too hard on the wallet:

Here’s the colour chart for my four M Graham acrylics: 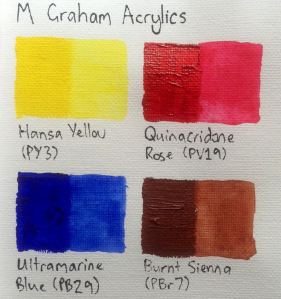 M Graham acrylics are a heavy body paint, slightly thicker than the Atelier Interactive acrylics, but not quite as thick as the Derivan Matisse Structure acrylics. They retain brush strokes and palette knife marks quite well, making them a good option for those who like to use impasto or other textural effects, and they dry reasonably quickly. While acrylics can generally be thinned easily with water, I found the M Graham acrylics became a little tacky when I did this (unless I thinned them right down to an inky consistency like in my swatches above), but if I used flow or extender medium, they worked perfectly well. Pigment load is strong in these paints, and it was easy to get opaque coverage without having to use multiple layers, even in colours that are usually only semi-opaque.

These paints are also middle of the road in terms of price, dearer than Atelier Interactive and Matisse but much cheaper than Winsor & Newton and Golden Heavy Body acrylics. However if you don’t live in America, they are probably going to be difficult to find. The only place I have found that sells them (aside from America; postage and currency conversion makes their stores no longer viable for me) is The Art Shop in Victoria (Australia). They post to anywhere in Australia but if you like to be able to walk into a shop and buy a new tube off the shelf if you run out suddenly, that’s not really an option with the M Graham acrylics (they do have a brick and mortar store in Bayswater but it’s not practical to get to unless you live in the area). Unlike most other brands, they only come in 59ml tubes, with no larger sized tubes or jars available.

For this review painting, I also used some Titanium White and Phthalo Blue acrylic in the Derivan Matisse Structure line. I have also written a demonstration post for how I did this painting. The painting was based on some pictures uploaded to the Wet Canvas Reference Image Library by mclmd.

M Graham acrylics are a good choice if you want a heavy-bodied, strongly pigmented acrylic at a decent price, but unfortunately their relative scarcity may mean they are a less attractive option than other brands that are readily available at any local art store. Hopefully they eventually gain traction and more local art supply retailers begin to stock them.