When I was starting out in watercolours, many of the instruction books I was reading discussed Winsor & Newton watercolours. My grandmother had always used their oil paints so I grew up being familiar with the brand, and the fact that they were available in every art shop around me suggested they must be good quality. At first I just bought a few tubes, but gradually accumulated more through online sales (too many, if I’m honest; I used to have nearly double the number of tubes you see in the photo below). I’ve played with these and many other watercolours since then so I thought it was time I reviewed Winsor & Newton watercolours on this blog.

(note: I am planning to do a dedicated colour chart for the Winsor & Newton watercolours but for now, you can see most of the colours I have in the charts I made for my lightfastness tests across various brands)

At some point I also picked up a Lightweight Sketchers’ Box with 24 half pans, because I wanted a more portable set (but still with lots of colours) that I could take with me when I visited my grandmother. Admittedly it was also a bit of an impulse buy, but it was only $80 (from a seller who was closing down their business), and with the addition of a discount coupon I had, the box ended up costing less than half of what it sells for at retail.

So, what are the paints actually like? There’s a reason Winsor & Newton’s artist-grade materials are so popular and widely available; they are of a very high quality. Pigment load is up there with the best, and I find that some colours I use regularly (Cerulean Blue, Dioxazine Violet, Phthalo Blue) seem to look better in Winsor & Newton’s line than in many other brands. Opaque pigments like the cadmium yellows and reds are really opaque (unlike in some other brands where they’re only semi-opaque) and most colours can easily be lifted from the paper without leaving much of a trace behind. They also move around a lot when used wet-in-wet (especially the granulating colours, which seem especially active in the Winsor & Newton paints).

The only real issues with this brand will be for artists who like to pour tube paint into their own palette box or half pans and let them dry out. Unlike most other watercolour manufacturers, Winsor & Newton actually use a different formula for their pan paints versus that for their tube paints. This means that while other brands of watercolour can be re-activated easily and used exactly as if they were fresh after they have been allowed to dry, this is difficult with most Winsor & Newton watercolours. Though some colours will rewet to the point where they are functional, they lack the strength and vibrance of colours used fresh from a tube or used from an actual pan. I also found that a few of the earths (eg. Burnt Sienna) did not rewet to a uniform wash but instead to a gritty puddle, which wasn’t really usable. Some colours (in my experience, earths and cobalts) actually dry so hard they start to crack, and it is nearly impossible to get any colour out of them once they reach this state. This also means that techniques for salvaging dried up tubes (ie. cutting it open, scraping out the paint and packing it into a pan or half-pan to use dried) that work for other brands won’t work with these.

Many artists pour out only enough fresh tube paint to use in one session so for those it won’t be an issue, but it’s something to keep in mind if you like to use pans or a dried palette, as you would be better off either buying the Winsor & Newton pans or using a different brand of tube paint to make your palette.

Here is a painting I did with my Winsor & Newton Artists’ watercolours.

A Pair of Pears.

Winsor & Newton Artists’ Watercolour Field Box
I also picked up the Winsor & Newton Artists’ Watercolour Field Box for about $50 recently on eBay (a bargain, considering the Cotman version sells for about $180 in the craft shop at my local shopping centre; everything in there is ridiculously overpriced though). It had been reduced because of damage to the cardboard packaging (which isn’t that visible in the photo) but the box and the paints themselves were fine. Though I’ve already reviewed the paints themselves above, I felt like this little paint box was interesting enough to deserve its own mini review. 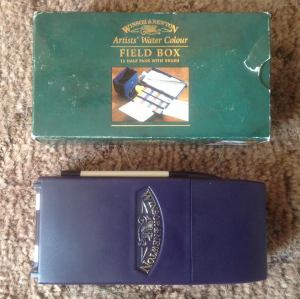 The Field Box comes with 12 half-pans in well-selected colours, allowing for any colour to be mixed (I still switched out a few colours though, because I can’t resist tinkering). You can also stick an extra two half-pans in there (a trick I have seen various other artists do) if you find yourself really missing an extra colour that isn’t included. The lid for the box can clip onto the end of the box and be filled with water from the little white bottle tucked inside. This white bottle doubles as one of the three mixing areas.

The set also includes a little sponge, useful for washing large areas or perhaps for creating foliage textures. There is a little brush included, but it seems to only be a size 1 or 2, which makes it a bit small for all but fine details. Though you could use the sponge, I find it easier to also bring along a water brush with a bigger tip so I can paint wider lines when I want to.

It wouldn’t fit in a pants pocket, but it would easily fit inside a big coat pocket or inside a handbag or backpack if you’re out and about. The box has a thumb ring on the bottom to help you hold it, and the dark blue plastic with Winsor & Newton’s logo emblazoned on it in silver gives it the look of a classy bit of gear.

I’m not sure I’d pay the full retail price for this, but if you can find one for under $100, I would definitely recommend buying one. It is just such a nice little portable watercolour set and its compact nature means you can take it with you and paint wherever you go.

Winsor & Newton Cotman Sketchers’ Pocket Box
My parents went on holiday to Canada and Hawaii a few years ago. I wanted to try some Daniel Smith watercolours and at the time they were hard to find and expensive here, so my folks told me to give them a list of colours I wanted and said that if they came across any art stores in their travels, they would try to buy some for me. When they returned, they had not only acquired most of the Daniel Smith colours I wanted, they’d also picked up a Winsor & Newton Cotman Sketchers’ Pocket Box which was apparently in a bargain bin in one of the stores they’d visit (“It’s cheap art shit, she’ll love it,” was my Dad’s logic, according to my mother). I love watercolours and I love paint boxes – especially cute little ones – so I was happy to add it to my collection.

This box really is pocket-sized; it’s smaller than most mobile phones and it’s very light. The lid contains several segments for mixing colours, so you can have a number of different colours mixed up at a time, rather than constantly having to clean it out so you can mix something else. The brush is the same as the one included in the Field Box (I think it’s a size 1), so again, you would need to either bring along a water brush or just a bigger paint brush. 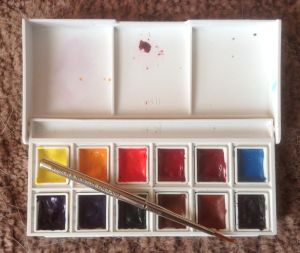 For those who aren’t familiar with the Winsor & Newton paints, Artists’ are (as the name would suggest) the artist quality brand, while Cotman is their student grade line. As you can see from my photo above, I no longer have the original Cotman half-pans in the box. This is because I was unimpressed with the quality of the paints. Even though they are student grade, I still expected them to be of uniform consistency and the colours to be reasonably strong. Though the Intense Blue was nice and bright, I was disappointed with how weak and watery most of the other colours were (even earths like Burnt Sienna; these are among the cheapest pigments to obtain so there’s no reason to skimp on them in the paints). Two of the colours (Cadmium Yellow Hue and Cadmium Red Pale Hue), didn’t seem to have been mixed properly. Rather than being solid, the cakes of paint within the pans were soft and squashy, to the point where I could mold and reshape it with my fingers. It was also spongey enough that when I stopped harassing it, it returned to its original shape. It was almost impossible to get any pigment out of these colours, as even after I soaked the pans and left it for a few minutes before trying to lift paint from it with my brush, the paint was still almost transparent. I gave up trying to use them after a day or two and sold the half-pans on eBay for about $10 so I could put in my own half pans filled with Daniel Smith watercolours.

The box itself, though, is wonderful. If you want a really tiny watercolour paint box, it might be worth getting yourself one of these; either get the Artists’ version, or get the Cotman one and fill it with your own half-pans or tube paints, and give the Cotman half-pans to a child who likes painting.

As a final note, if you buy any of the Winsor & Newton whole pan or half pan sets, double check whether you’re getting the Cotman or Artists’ version, because a lot of the sets have exactly the same box and similar packaging; you don’t want to get home and find you’ve spent all your money on the wrong one.