Most of the first watercolours I bought were tubes, but the first artist grade watercolour pan set I bought was a little metal tin with 12 Schmincke Horadam half pans. Half of what drew me to it was the cute design on the tin. 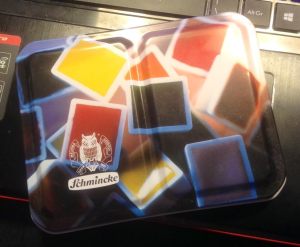 The set was on sale on Wet Paint Art’s website (it was a limited edition and is no longer available but I believe you can still find similar ones), so I ordered it and gradually got another six individual half pans, as there was room for 18 half pans in total. Given its compact size and the fact I can fit a travel brush in there (my travel brush is a Da Vinci), it’s one of the sets I use most often, so I thought it was time I reviewed it for my blog.

Here’s the colour chart for the Schmincke watercolours I have (they are not as faint as they look here; the light was poor when I took the photo and my auto-adjustment on my iPad camera overcompensated a bit). 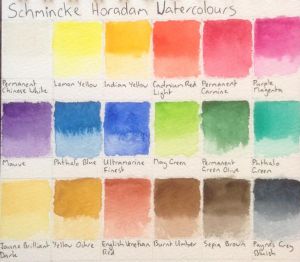 When I bought my set, it was about $60 USD not including shipping) which is quite cheap for Schmincke paints; starting at about $5.50 for a half pan and $11 for a 15ml tube (in AUD, but from a UK site) they are usually among the mid-range of price in terms of watercolours. I did have two tubes a few years ago (a Burnt Sienna and an Ultramarine Blue), and when I bought them, both had separated, so when I tried to squeeze out paint, all I got was a flood of some clear yellow gummy substance. As these are fairly common colours and were bought from an online shop which I would expect to have a fast stock turnover (ie. the tubes shouldn’t have been sitting on a shelf for several years before I bought them), this was disappointing. It’s possible I just got unlucky, but the experience did put me off buying more Schmincke tubes. Still, the pans, at least, are good quality and are therefore worth their asking price.

Pigment information is listed on the tubes and pan wrappers, which is handy as there are a few odd mixtures (the Ultramarine Blue tube I had was actually made of PB29 AND PB15, or phthalo blue, but luckily the Ultramarine Finest that came in the pan set I bought was pure PB29). Pretty much all the colours I have performed well in my lightfastness tests. The pigment load in the Schmincke watercolours is very high, making it easy to achieve a deep, solid colour in very few layers. Unfortunately the actual colours often bear little resemblance to the colour swatches in the pamphlet on Schmincke’s website; on a few occasions, I bought colours based on these swatches, only to discover they looked completely different in real life and therefore didn’t suit my needs.

One thing I have noticed about my Schmincke paints is that they are not quite as vivid or saturated (for lack of a better term) as, say, my Winsor & Newton or M Graham watercolours that use similar pigments. It is a fairly slight difference and is by no means a deal-breaker, but it is noticeable, particularly in the phthalo colours and in Mauve and Purple Magenta, which just don’t seem as intense as normal. Depending on your subject preferences, this might not be a bad thing, as it would be easier to mute overly bright colours in realistic paintings. The paints are quite active when used wet-in-wet and most colours (aside from the usual staining colours) lifted easily when rewet.

Here is my sample painting done with the Schmincke watercolours. 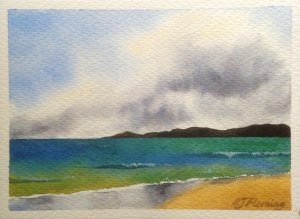 The character illustrations used as examples in my reviews for Faber-Castell PITT pens and the Sakura Pigma Micron pens were also coloured in using the Schmincke watercolours. I didn’t like the Schmincke tubes I had, but I am very impressed with the pan watercolours, though there are cheaper paints out there that are of comparable quality. I would definitely recommend trying the Schmincke watercolour pan sets if you want an artist grade set of paints, but if buying individual colours, try to find a painted swatch of the colours you want online rather than relying on Schmincke’s website (and check the pigment formulations first to make sure you’re getting a pure pigment and not a strange mixture).

Update 20th February, 2017: In January 2017, I got an email from Jacksons in the UK about how Schmincke had released 35 new colours (some reformulated versions of old colours and some completely new pigments to their range). They had a deal where if you bought a few of the new watercolours, you’d get a sheet with a dot of each of the new colours to try. I bought a few half pans because I’d wanted to swap a few colours out of my set anyway, and when I got the dot sheet, I immediately made a colour chart. 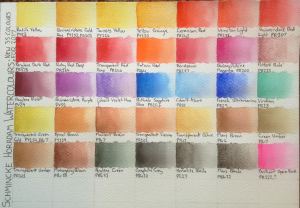 With these new colours, there are now about 140 colours in the Schmincke range. As far as I know, this is the first time Schmincke has included Quinacridones in their lineup, and given how popular these are with many artists, it’s nice to see them catching up in this area. There are some lovely granulating colours here as well; Mars Black, French Ultramarine, Mahogany Brown, Potter’s Pink (a useful colour for landscapes) and my favourite, Cobalt Violet Hue. There’s also a bunch of new reds that will make floral artists happy, and a lot of transparent earths that will go well in landscapes or portraits. The colour I was most excited to see was Cobalt Azure; I’ve had trouble finding a relatively pale blue in the Schmincke range (aside from my Ultramarine Finest, the Prussian Blue, Phthalo Blue and Cobalt Cerulean were all too dark and intense for my tastes) so I’ll be adding a half pan of that to my next order, along with a Green Umber and maybe Ruby Red Deep.

There are a lot of pigments in here that I’ve never heard of before, so hopefully there aren’t any issues with lightfastness (except for Brilliant Opera Rose; any of the bright, borderline fluorescent ‘opera’ colours are generally very fugitive). I’ll put this sheet in my window and see how it goes.

This entry was posted in Materials, Reviews, Watercolour and tagged Painting, Schmincke, Watercolour. Bookmark the permalink.