Derwent is one of the oldest and most well-known manufacturers of artists’ coloured pencils, and anyone who has ever dabbled in art has almost certainly used at least some of their products at one time or another. For as long as I can remember, they have had a line of watercolour pencils (I had a tin when I was young) and more recently they brought out the Aquatone pencils.

Here’s my chart showing the Aquatone dry and after a wash. The 24 colours available in the full set are taken from the 72 colour range of Watercolour pencils, and the range is well chosen to provide all the colours you need to mix any colour you could want. The difference between Watercolour pencils and Aquatone is that, where the Watercolour pencils are a watersoluble lead encased in wood, the Aquatone is just a pure stick of that watersoluble lead, giving you about four times the amount of usable pigment than you’d get in normal pencils. It’s especially economical because you basically don’t need to sharpen them.

Though I had enjoyed playing with my Derwent Watercolour pencils as a child, I’d never really grown to love the texture, which was hard and waxy but scratchy at the same time. I ended up selling the set a few years ago and though Derwent later reformulated their Watercolour pencils, I never bought any more (the general consensus among other artists seemed to be that the new formulation was better and smoother).

I’m not sure if Aquatone uses the old formula or the new one, or if it originally used the old one but was also upgraded. What I do know is, Aquatone managed to feel even more scratchy than the old Watercolour pencil formula. Even on a smooth sketching paper and applying heavy pressure, it was nearly impossible to get even coverage. Also, though I’ve been able to put down a lot of layers on this same paper (a bamboo-based sketching pad with heavyweight paper I bought from the bookshop at uni) with other coloured pencils, the Aquatone started to develop a hard waxy surface and refuse to take any more colour after only two or three layers. The Derwent Signature pencils were worse… but not by much.

Though I didn’t particularly care for how these pencils felt when used dry, they were a bit nicer to use once I added water to the mix. When you need to cover a large area quickly, you can break off bits of the pencils and use them on their side to block out colour in the same way you might if you were using pastels before applying a wash over the whole lot. They can also be dipped in water and used to draw directly onto the paper, producing strong, bold lines. Finally, you can use them in the same way you would use traditional watercolour pans, by wetting a brush and using it to lift colour directly from the pencil (though the colour is still quite weak compared to if you just used proper watercolour paints). I know their primary purpose is to be watersoluble, it would have been nice if they still applied smoothly when used dry, as other watercolour pencils I have seem able to do without any issues. Also, like most watersoluble media, the colour is not permanent once it has been washed, meaning you can reactivate it again by applying more water. On this note, I found it took quite a bit of scrubbing to get all the pigment to dissolve cleanly.

Lightfastness ratings are not provided on the tin or on the pencils themselves, and nor was I able to find a chart on Derwent’s site. I did manage to find a colour chart for the Aquatones on Pinterest, though, which noted that five colours – Middle Chrome, Crimson Lake, Magenta, Ultramarine and Burnt Carmine – fall below 6 on the blue wool scale and are therefore fugitive. This is disappointing as it means that most of the reds and violets are not suitable for use in anything you want to sell or display.

Here’s a quick painting I did with the Derwent Aquatone, using a combination of all the methods I described above. 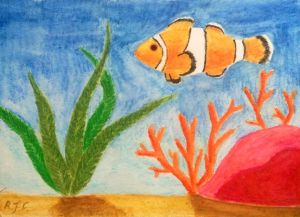 In the end, I had fun playing with the Derwent Aquatone, but I’m still not sure I’d recommend them. You get a lot of pigment for the (noticeably) higher price you pay for them compared to Derwent’s other watersoluble pencils, and the ability to use them for fine detail or break them to cover large areas of colour quickly and create washes means they would certainly have their uses, but I just think there are plenty of other products out there that already do it better. Perhaps if they were smoother – like everyone claims the new Watercolour pencils are – I’d feel more positively about them, but I can’t see myself using these again. Though they are more expensive, I find that the Faber-Castell Albrecht Durer and the Caran d’Ache Supracolor pencils far surpass the quality of the Aquatone pencils, and in my view, it is worth paying the extra money for those instead.