When I was younger, it seemed that all the art supplies available were by Winsor & Newton, and they were frightfully expensive (and still are) here in Australia. Gradually a few other brands came onto the market, and though some of them are now very successful, it always seemed that Winsor & Newton was still top dog. Recently, however, another giant reared its head: American manufacturer Daniel Smith. These were originally only available from one local supplier, and in 15ml tubes – making them expensive to try – but they are now sold in 5ml tubes, with a limited selection of other colours being sold in the form of watercolour sticks. I don’t have any of the sticks, so I can’t talk about those, but I do have a number of tubes, and since I’ve been using them for a little while now, I thought it was a good time to do a review.

With a total of 247 colours (the largest range of any watercolour brand), artists will have no shortage of choices for their palette (if anything, they might find it a bit overwhelming). As you might imagine with such a large range, there are a lot of similar colours, especially in the yellows, reds and earths. Still, several art supply retailers sell Daniel Smith watercolour dot cards with samples of almost every colour, so you can try them for yourself and see which ones you like before committing to buying full tubes. I wish more watercolour manufacturers did this. 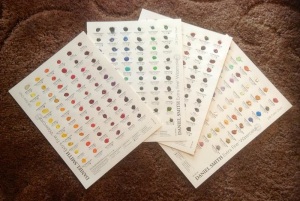 One thing I and many other artists love about Daniel Smith watercolours is that you can either use them straight from the tube or you can pour them into empty pans or palette wells and let them set, and they are still perfectly usable. Even colours which are sometimes problematic in other brands (drying so much they are difficult to rewet) don’t seem to have those issues. Pigment information is also written on the tubes, so you know exactly what you are getting if you’re buying it in the shop and don’t have access to the internet to look up the pigments online. Many of the Daniel Smith colours are single pigment formulations, though there are still plenty of convenience mixtures for those who like them. The majority of them are lightfast, but as always, it pays to check the ratings or do your own lightfastness tests. 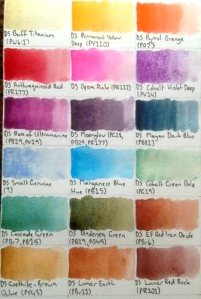 As you can see in my swatches above, some of the colours granulate in really interesting ways, like Cascade Green and Undersea Green, which separate into green/green-blue and green/brown respectively. Though you can get similar colours by mixing other paints, it doesn’t have this beautiful reticulated effect. This makes them especially useful for painting plants or animals that need that extra bit of texture.

Not surprisingly for a line with this many colours, there are a few flops in the Daniel Smith range, not just in terms of being too similar to other colours but because they are just too weak or watery to bother with. Cobalt Green Deep and Smalt Genuine above are good examples of this; both of those swatches above required several layers to build the colour up that strong, and you could easily mix something similar by just heavily diluting other colours. To add insult to injury, Smalt Genuine is a Series 5 colour, meaning you would pay about $40 for a tube of it.

This is my ‘standard’ colour palette; I bought the 5ml tubes so I could put them in my empty Schmincke metal tube box, and then I made half pans from them for use in my empty Winsor & Newton Cotman Pocket Sketch box, which I’d sold the original paints from because I thought they were weak and poor quality. 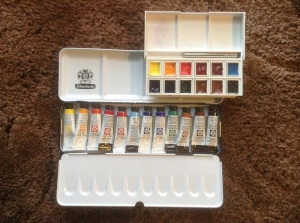 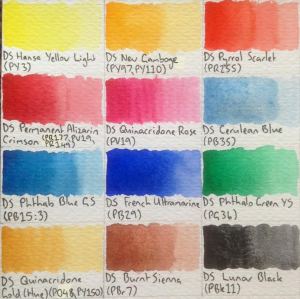 This is very similar to the colour range I generally use in watercolours, and it was easy to find corresponding colours in the Daniel Smith range. I also added Lunar Black for its granulating behaviour, which makes it beautiful on its own and mixed with other colours, especially Phthalo Blue, Phthalo Green or Quinacridone Rose. I would probably like to add Burnt Umber and Buff Titanium as well but I only had room for 12 in my paint boxes. I was happy to find that the Phthalo Blue is as vibrant as Winsor & Newton’s Phthalo Blue; in many other brands, I find this colour is a darker, more muted colour than I like.

In addition to their standard watercolours, Daniel Smith also produces a few specialty lines, which I think are worth talking about in separate sections.

Also, Daniel Smith are the only watercolour manufacturer still selling genuine Quinacridone Gold as the pigment itself is no longer being made and they acquired all the remaining stock; other companies do still make Quinacridone Gold paints, but they are mixtures of other pigments and are generally not considered to be as good as the real deal. In fact, Daniel Smith only use the genuine pigment in their 15ml tubes; their 5ml tubes are also mixtures of other pigments. This makes sense when you consider that most people who buy 5ml tubes are beginners or new to watercolour, so there is no point in getting them used to a pigment that will run out in the near future, but it allows existing watercolourists who love the colour to keep using it for as long as they can (and newcomers could always just shell out for a large tube if they really want the genuine pigment).

PrimaTek
PrimaTek colours are made from actual gemstones, and as far as I know, Daniel Smith is the only manufacturer to do this. These paints have different effects; some are one solid colour but with a subtle shimmer (such as Amethyst Genuine and Fuchsite Genuine) while others are not sparkly but simply granulate in beautiful and interesting ways, like Serpentine Genuine which separates into a gorgeous green flecked with brown. There are 37 PrimaTek colours, ranging from blues and violets to greens and earths, and the prices vary wildly depending on the gemstones used; as Series 1 colours like Mummy Bauxite aren’t too expensive, but Series 5 colours like Lapis Lazuli Genuine and Sleeping Beauty Turquoise Genuine will really hurt your wallet. This might still seem like a reasonable sacrifice if the colours were truly special and luminous, but the problem is, many of the PrimaTek colours just… aren’t. I have tried most of the PrimaTek colours from either my Daniel Smith dot sheet or from the samples I received in a swap from another artist on the WetCanvas forum, and I was very unimpressed with Lapis Lazuli Genuine; the swatch below took many layers to build up to that blue, as even used at full concentration, it is a pale and watery disappointment, similar to Smalt Genuine. There are other colours which, while they look okay, are nothing special and certainly not worth shelling out top dollar for. 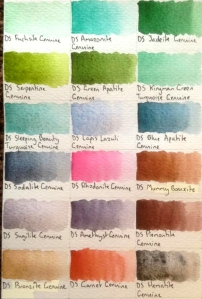 It is really worth getting your hands on one of Daniel Smith’s dot charts so you can try the colours yourself before buying them, or at least look up other artists’ swatches online, as the colour chart on Daniel Smith’s page makes some of the PrimaTeks look far more colourful and vibrant than they really are.

Luminescent
Finally we come to the Luminescent range. As the name suggests, these are paints contain mica for a beautiful sparkly look, but even within this range, there are different categories. The Iridescent paints will probably seem familiar to some people as some manufacturers make similar products (not with this many colours, though). The Iridescent paints come in a variety of colours and all have a vibrant, metallic sheen. Then there are the two Pearlescent paints (Shimmer and White, which are almost identical and admittedly feel a bit superfluous to me) which provide a subtle, pale shimmer. The Interference colours look white or almost white when they come out of the tube, but their beauty lies in their application over other colours; once they are put over a dark under-layer, their alternate colour shines through (putting a bit of Interference Green on some ocean waves is a lovely and slightly fantastical way to finish off a seascape painting). My favourite Luminescent paints are the Duochrome colours, which change colour depending on how you look at them. Some of the colour shifts aren’t that dramatic (eg. there are a number that start off as one colour and then turn silver), but others completely change, such as Desert Bronze, which can look like either a shimmering reddish brown or a glittering emerald green. I think that anyone who does a lot of science fiction or fantasy-themed paintings would love the Luminescent paints, and they are all Series 1 and are therefore usually among the cheapest of the Daniel Smith colours (about $15 AUD for a 15ml tube).

Here is a painting* I did with some of my Daniel Smith watercolours. Unfortunately the scan doesn’t show it, but the pale purple used for the unicorn’s body is Sugilite Genuine, which has a beautiful subtle shimmer in person. The mane and tail were painted with Moonglow and the greens were Serpentine Genuine, either used straight or mixed with a little Lunar Black. 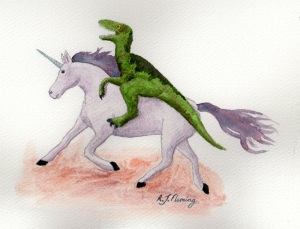 I wouldn’t hesitate to recommend most Daniel Smith watercolours to either novice painters or experienced artists (with the usual proviso that you check your pigments). Their ‘regular’ paints are highly pigmented and of good quality, and the PrimaTeks and Luminescent paints can really add something special to your paintings. It might be worth shopping around, though, as I found it cheaper to order from the UK (even with shipping) than to buy the paints locally.

* Yes, it is a velociraptor riding a unicorn. No, it doesn’t make sense. I vaguely remember drawing it after I asked friends on Facebook what I should paint and was bombarded with insane and idiotic suggestions as a result, but the real reason has probably been wiped from my memory (maybe it’s better that way).