Some time ago I came across a clearance section on an art supplies website that had a number of watercolour sets going cheap as they had been discontinued. One of those sets was the Sennelier Landscape set of 14 half pans. 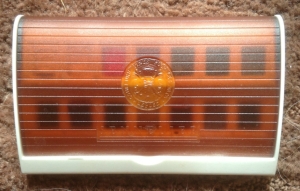 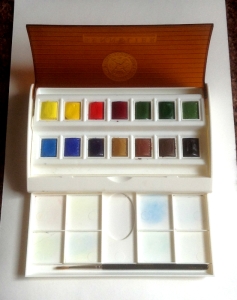 I hadn’t tried Sennelier watercolours before, and the palette box they came in looked handy, with its slide-out mixing tray and thumb-grip and a little brush. When it arrived, I made my colour chart. The two colours marked with a * were not included in the original box; I’ll go into that a bit later. 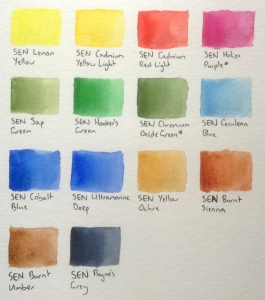 Like the M Graham watercolours I have previously reviewed, Sennelier watercolours are made with honey as one of the binder ingredients. Given how much I loved the M Grahams (which only come in tubes), I was interested to see how a honey-based watercolour in pan form would compare. I was expecting that they would rewet easily – more easily than a non-honey-based watercolour, at least – but some of the colours did take a bit of scrubbing to activate, or I had to put a drop of water on it and leave it for a minute or two, rather than instantly picking colour up like I can with most other brands. This isn’t a hardship by any means, but I thought it was worth noting.

I also felt that some of the colours weren’t as strong as they are in other brands. Cerulean Blue, Sap Green and Burnt Umber, for example, seemed a bit watery even when I used them with hardly any water. One of the colours that came with the box – Terre Verte, a pale, muted green – was so thin and watery that I wondered what the point of its existence was, as even when I slathered layers of it onto the paper, it maintained its wishy-washy appearance. Given that it would be easy to achieve a similar colour by simply mixing and heavily diluting other colours in the box, I felt annoyed that they had included Terre Verte instead of something more useful. I ended up swapping it out for Chromium Oxide Green, just as I replaced the fugitive (but pretty) Alizarin Crimson with the more lightfast Helios Purple.

As far as the box itself goes, I thought it was a nice design, though perhaps a bit more bulky in the top than was necessary. The mixing tray is a decent size and has plenty of smaller compartments, so you can mix lots of different colours without constantly having to stop and wipe away old colours. Though the brush they included – a Sennelier Round size 3 – would be good for small details, you would need to bring along a larger brush for bigger areas, as the size 3 is just too small. Given the space in the tray for the brush, I felt like they could have included a slightly bigger one to begin with, but it’s easy enough to take it out and put one in that you like.

Here is a little painting of a tulip I did from one of the example exercises in Wendy Tait’s book, What to Paint: Flowers in Watercolour. Overall, the Sennelier watercolours are decent, but I think there are better paints out there. You probably won’t have any issues if you are buying individual tubes or pans but be aware that if you buy a set of Sennelier, you will probably find yourself having to substitute some of the colours. As I said in the beginning of this post, this particular set has apparently been discontinued, but a number of other Sennelier half pan sets are still available.

This entry was posted in Boxes and Palettes, Materials, Reviews, Watercolour and tagged Painting, Sennelier, Watercolour. Bookmark the permalink.